Tila Tequila, the Hateful Hypocrite: Obesity and Make Up

Tila Tequila, also known as Tornado Thien, is well known for her pathological lying and hypocrisy, so it's not surprising that today she hates on one thing and tomorrow she glorifies it. From one extreme to another and always in the constellation that she is the one who shall look like the superior one.

Tila Tequila's Public Hate For Obesity and Make Up


In 2018 Tila Tequila fat shamed Youtuber Nikkie Tutorials by putting a screenshot of one of Nikkie's make up videos on her (now deleted) facebook page and wrote the following: 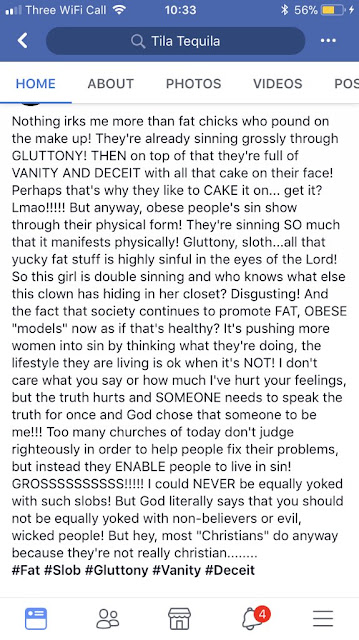 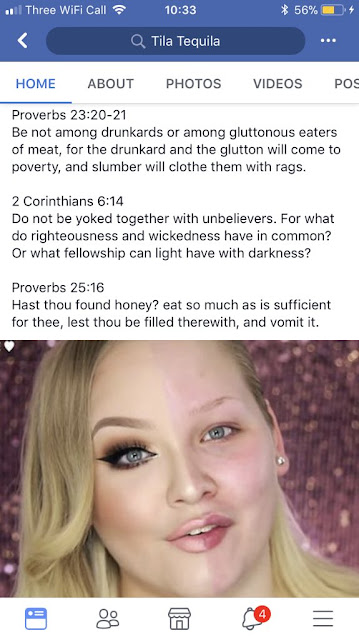 The picture of Nikkie Tutorials is a screenshot of her video "The power of MAKE UP!"

Tila Tequila claims that all overweight or obese people sin, are gluttonous, are full of vanity and deceite and are lazy and gross. She calls Nikkie (who is beautiful in my opinion, with or without make up) even a double sinner, a clown and that her lifestyle was not ok.

Wearing too much make up "cake on their face" is also not ok in her opinion.

Tables turned in 2020: Tila Tequila is Now Obese and Wears Make Up

Now, the fun part is how only two years later Tila Tequila is now overweight, almost obese, herself and wears lots of make up.

In one of her videos she claimed that she now weighs 145 pounds and at 149 cm height she therefore has a bmi of 29,3.

Now, in my opinion a bmi of 29.3 is totally fine. I would like to have a bmi of only 29.3 myself, but it's not about my opinion in this matter and it's not my type to make fun of people's weight. I'm just pointing out the hypocrisy of Tila Tequila:

Tila Tequila, who slanders people on a daily basis on her social media sites with hundreds of thousands of followers, became herself what she hated so much from the bottom of her heart: A highly overweight, almost obese, person who puts on make up to appear prettier.

People Now obviously remember and even make fun of her appearance and post matching screenshots of her videos:

and also Tila Tequila in January 2020 (original from twitter here):

Probably the reason, why Tila Tequila puts on make up now:

compared to Tila Tequila a few years ago: